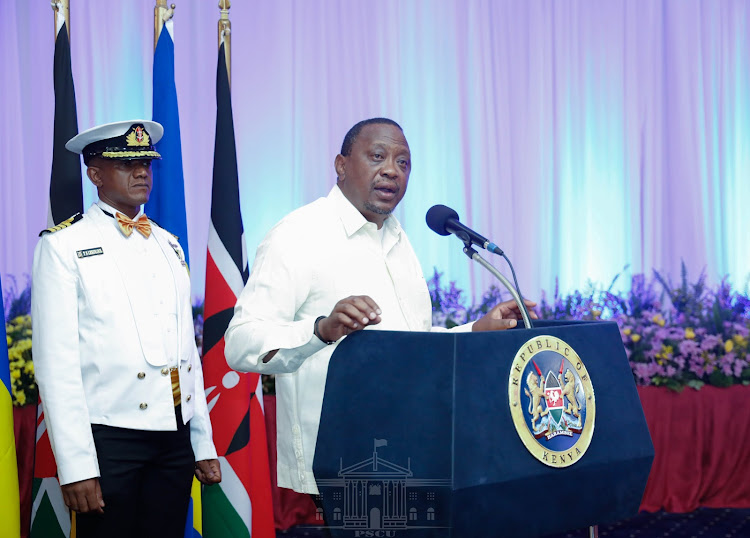 President Uhuru Kenyatta on Thursday directed the KRA and the National Treasury to immediately embark on an overhaul of Kenya’s tax regime with a view of reducing the burden on Micro, Small and Medium Enterprises (MSME’s).

“Kenya’s economic growth figures have been impressive but the tax burden on SMEs has to be reduced so that a bigger margin of Kenyans can reap the benefits,” Uhuru said.

Uhuru issued the directive during the 56th Jamhuri Day celebrations at the Nyayo National Stadium on Thursday.

The ceremony was attended by Prime Minister Mia Amor Mottley of Barbados.

He said the Government is focused on unlocking bottlenecks that are holding back the potential of Kenyan enterprises.

“My Administration is focused on other salient factors that are holding back the potential of our enterprises; particularly with regard to taxes and tax administration, reduction or where possible elimination of fees or charges levied by Government Agencies as well as the Private Sector,” he said.

READ  Kenya to borrow syndicate loan to retire 200B

Uhuru added that the government is determined to ensure elimination bureaucracy and simplification of processes in trade, access to credit as well as streamline consumer protection.

“In order to address some of these challenges, I order and direct that The National Treasury and the Kenya Revenue Authority, review our tax structures, especially in relation to small businesses, so as to reduce the tax burden while fostering tax-compliance.”

He further directed that as a way of reducing the compliance burden on employers, all employer contributions/deductions of NSSF, NHIF, PAYE and NITA be made through a unified payroll return submitted to the Kenya Revenue Authority.

Following the successful launch of SME financing program STAWI, the President said the government will soon introduce other products such as Stawisha SME Mashinani and take other administrative measures geared towards enabling SMEs to play their rightful role in national economic transformation agenda.

The President also directed that the national treasury and the judiciary come up with mechanisms to ensure that commercial disputes below the value of Shs 1 million are exempted from court fees.

Gladys Sholei a Jubilee Lawmaker claims BBI confirms Uhuru has failed. In other countries he would be impeached

Intrigues that delayed handing over BBI report to Uhuru, Raila