A book published in 1879 examined this question, observing, “It is as though an immense wedge were being forced, not underneath society, but through society. Those who are above the point of separation are elevated, but those who are below are crushed down.”

Dollar inflation cannot be the answer, since money, in itself, has no bargaining power. We do not work for money; we work for the things money can buy. If a good or service were to become too expensive in dollar terms, in a state of freedom we could work directly for the good or service we desire and skip the process of acquiring money.

“Capitalism” isn’t an answer, since many people use the word as a meaningless punching bag. It is often defined (as I already see it defined in an answer here) as “a system of unearned inequality,” and so to blame capitalism is to quit, intellectually, and enter a never-ending loop where we blame inequality on a system that generates inequality without identifying the specific mechanisms it uses to do so.

The answer is much, much simpler than people seem to think. In a free, competitive market, real prices tend to drop over time. This is an obvious economic truth, since consumers who have a choice, all else equal, will choose to spend less on an item instead of more.

It follows, logically — and you will observe that this is true — that behind every rising real price is a government-backed monopoly. Here are things whose prices tend to increase over time, at least in the USA, and the instrument of state violence that causes the increase:

READ  SHOCKING: A Lady R@ped In a Night club

The list goes on — utilities, taxi fares — but they follow the same theme. And some, like broadcaster monopolies on the EM spectrum, have their market value so deeply hidden by the state you can’t really observe it. All you observe are the freeholders of those monopolies getting more and more powerful (News Corporation, Viacom, Disney, etc.).

So the answer is state-backed monopolies. But, to crassly paraphrase Henry George, the author of Progress and Poverty, which I quoted earlier, there ain’t no monopoly like land monopoly. If you have to pay a group of people for the right to exist — i.e., occupy land — there’s nothing they can’t take from you except what you need to survive. 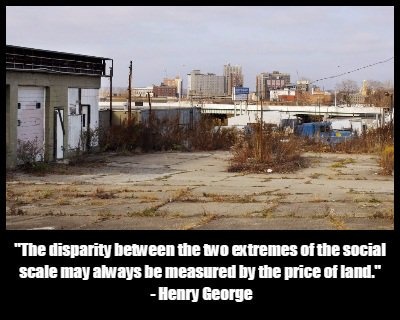 How else is wealth created besides labour?